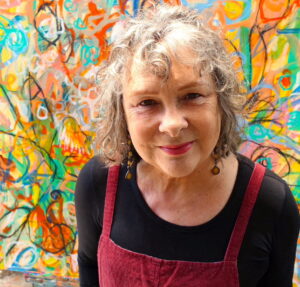 Robbi began to write when she was diagnosed with aggressive cancer and she was told she had a 20 percent chance of surviving the next three months of her life. Knowing her youngest children who were three and five wouldn’t remember her if she died, she began to write. That no-holes-barred memoir was a winner of the Varuna HarperCollins Manuscript Award. The memoir called Sunday Best was published in 2004 and Women’s Weekly wrote – “One of the best books of the year – I devoured it in two days.”

Robbi grew up in a very strict religious family.  There was no cooking, going out, reading non-christian books, watching TV on a Sunday. There was no alcohol, cigarettes, dancing, make-up at any time. Robbi says, ‘Women were offered one choice in life – to be a man’s helpmeet. I railed against this. I wanted my own life and my own achievements. I would say I wanted to be a farmer or a Reverend when I grew up and people would say, “Well perhaps you can marry one dear.”‘

Instead of marrying a farmer Robbi greatly disappointed her parents by applying for and getting into the Victorian College of the Arts to study painting. Her parents said any tertiary education was wasted on a girl. Robbi then pleased her parents by marrying and having her first child whilst still at art school but disappointed them again by continuing her degree.

Robbi says, ‘I don’t think my lecturers understood the pressure I was under from my family to give up art and my studies. It was intense. I left home at 17, worked six hours in the morning as a cleaner to buy food and pay rent and then went to art school where I got into trouble for not coming in earlier. So, I was in trouble everywhere. I felt very alone because most of the art students were private school kids getting support from their parents. It was no wonder I rushed into marriage to a boy I’d only known a few months and hadn’t even kissed. I didn’t want to be alone anymore and besides my hormones were raging and as a strict christian the only way to have sex was to be married. We let God take care of our contraception – hence the baby.’

Robbi went on to divorce, marry again and raise five fantastic humans, get cancer, write books, work as a social worker and an arts manager before finally returning to  writing and painting.

She says, ‘When I’m not writing and painting I feel like my soul is shrivelling. I don’t feel like I have a choice. I loved raising my children but there wasn’t one day where I couldn’t write or paint that I didn’t yearn for it.’

Robbi says her writing and painting happen at an intuitive, emotional level. ‘I often don’t know what a book or painting is about until its completed and even then, it sometimes takes me some time to realise what was driving the work.’

Robbi also says that her heritage informs her writing and painting. One grandfather was Jewish and the other Scottish. Her grandmother was an Indigenous Australian . Robbi is proud of all her heritages. She says, ‘I have all these oppressed heritages coursing through me but I live and work on my grandmother’s land and I find my grandmother’s voice calling to me in my writing and painting and my heritage is what grounds me.’

Of her paintings gallerist  Giorgio Pilla says, ‘Robbi’s success, failures, pain and joy cascade from her work, her fragility and immense talent too.’

She lives in Ballarat, Victoria.

Her books are published by HarperCollins and are available in bookshops and as ebooks.

Robbi currently has a two book deal with HarperCollins. The Secret World of Connie Starr will be out in bookshops and online June 2022 and The Shifting Shadows will be out in 2023.

In June 2022 Robbi will be exhibiting at her gallery, Redot Fine Art Gallery in Singapore.